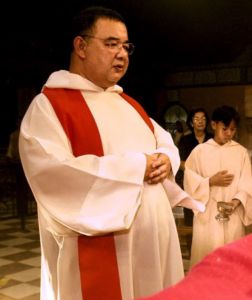 Notes: Msgr. Cristobal Garcia was a member of the Dominican religious order. Msgr. Garcia has been accused by at least two people of child sexual abuse. The alleged abuse occurred from approximately 1980 to 1984. Msgr. Garcia has been named in two civil lawsuits alleging child sexual abuse. In 2005, Msgr. Garcia admitted to having had sex with two teenage altar boys in Los Angeles. Msgr. Garcia was originally from the Philippines, and after he was expelled from the Dominican order in 1986, he went back to the Philippines’ Diocese of Cebu where he continued to work as a priest and was given the title of Monsignor. In 2012, Msgr. Garcia was removed from the Cebu Diocese without privileges after the Cebu Archbishop learned of the California allegations against Msgr. Garcia. Msgr. Garcia was included in the Archdiocese of Los Angeles’ list of priests accused of sexual misconduct involving minors. Msgr. Garcia’s current whereabouts, his status as a priest, and whether he has access to children are unknown.