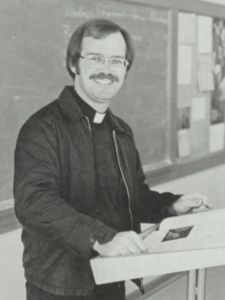 Notes: In 1987, Fr. Fessard was accused of sexually abusing multiple children. Fr. Fessard was removed from ministry in 1987 while law enforcement investigated the allegations. While he was under investigation, Fr. Fessard was sent to Servants of the Paraclete, an institution known for treating priests accused of child sexual abuse. Later in 1987, Fr. Fessard pled no contest to battery and soliciting lewd acts. He was put on probation for 36 months, required to register as a sex offender, and required to undergo counseling. In 1988, Fr. Fessard was sent to the Servants of the Paraclete for a second time. In 1994, parishioners reported that Fr. Fessard frequently showed up at youth group meetings, occasionally under the influence of alcohol. Following the parishioners’ report, Fr. Fessard underwent treatment for alcoholism and was sent to St. Luke Institute, an institution known for treating priests accused of child sexual abuse. In 1997, a man reported that when he was eight or nine years old, Fr. Fessard, sexually abused him in his bed at home. Fr. Fessard is alleged to have abused more than 20 people. He was laicized in 2007. Fr. Fessard was reportedly managing a mobile home park in Gardena, California, in 2013. He was included in the Archdiocese of Los Angeles’ list of priests accused of sexual misconduct involving minors. It is believed Fr. Fernando may be living in San Pedro, CA. Whether he has access to children is unknown.